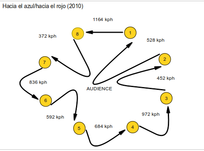 Hacia el azul/hacia el rojo (2010) [Towards Blue/Towards Red] is an eight-track electroacoustic composition realized during a residence at the Advanced Digital Audio Production and Performance Studio (ADAPPS), of the University of Guelph, with financial assistance from CSIC-UdelaR.

This 21-minute piece focuses on the exploration of a singular kind of spatial polyphony, created by means of the simulation of the motion through space at very high speed of a large number of sound objects.  The overall flow of sound material always proceeds counterclockwise, in a quasi-circular space around the audience. Within this overall flow, 84 sound objects “travel” at different speeds through a complex spatial path. The path is made of the juxtaposition of eight micro-trajectories, each one defined by the combination of two adjacent loudspeakers in an octophonic setup.

Sound objects consist of brief fragments of preexisting music, chosen from a variety of genres, styles and periods, in a particular mix that is meaningful to me. Many fragments are taken from my own music, and others from music of composers of my generation from around the world. There are also fragments from XXth century concert music, folk music from Latin America, rock and jazz.

The simulation of sound objects traveling through space at very high speed entails drastic frequency shifts and intensity envelopes produced as a consequence of doppler effect. Furthermore, the overall density of the piece creates a kind of macro synthesis, as the individual sound objects are seldom perceived as such, and, rather, tend to integrate into a kinetic mass of sound.

Hacia el azul/hacia el rojo was prèmiered in Montevideo on December 3rd, 2010, in a concert at Subte Art Gallery organized by the Electroacoustic Music Studio (eMe) of the National University.
It was presented as a sound installation at Klangzeit 2012 - Festival Für Neue Musik – Münster 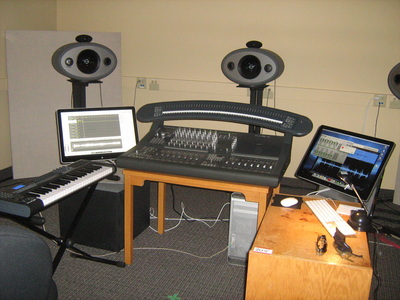 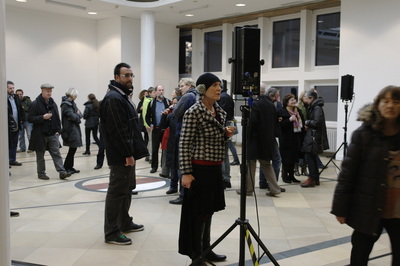